On October 14 and 15 in Warsaw there took place another annual conference of OSCE on human rights.

The delegation from the political movement “Group 24” also participated in this action. In the first day of a conference the members of our movement made reports on a situation with the rights and freedoms in Tajikistan.

For the second day, on end of an official part, the political movement “Group 24” held a picket opposite to the building, where there took place the meeting of OSCE. Drawing attention of the international community to a problem of political prisoners, to terrible crimes of the regime of Emomali Rakhmonov(The President of Tajikistan since 1994) and the Russian authorities concerning the oppositionists living in the territory of Russian Federation was the purpose of this action. 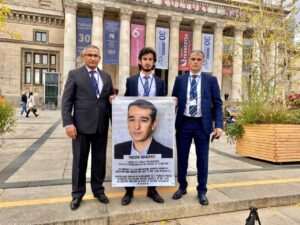 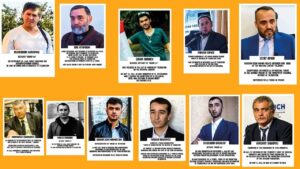 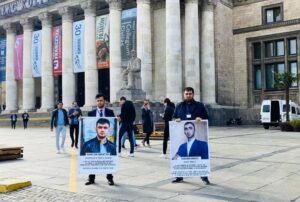 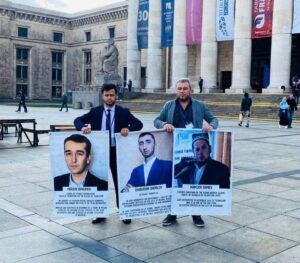 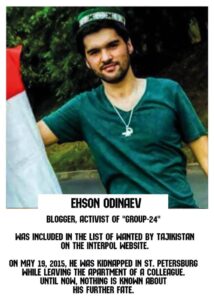 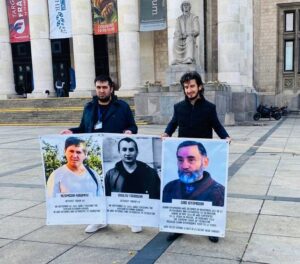 Makhmadruzi Iskandarov was kidnapped in Moscow in December, 2005, taken out to Dushanbe where in 2005 it was sentenced to 23 years of imprisonment. According to experts it is an event laid the foundation, so-called “cleaning of opposition” by the Tajik authorities. And as we see, this “cleaning” continues to this day.

Maksud Ibragimov was a citizen of the Russian Federation and lived in the territory of Russia about 10 years, in 2015 was deprived of the Russian citizenship, stolen and taken out to Dushanbe without documents in a luggage compartment. It was sentenced to 17 years of imprisonment as the activist of “Group 24”, for the political views and activity.

Ehson Odinayev since 2007 constantly lived in Russia, in May, 2015 was missing in St. Petersburg. I was the famous blogger and the activist of “Group 24”, today it is known that he is a political prisoner.

Said Kiyomiddin is detained in November, 2017 in St. Petersburg where went to visit relatives. He was extradited at once to Tajikistan where in May, 2018 he was sentenced to 25 years of colony. In 2019 it was killed during the revolt in colony Vahdat.

Karomat Sharipov had the Russian citizenship, but in December, 2017 him was deprived and deported to Tajikistan. I was the famous human rights activist of labor migrants in Russia. I died in May, 2020 of heart attack, for the rest of the natural I was under control of the Tajik intelligence agencies.

Shobuddin Badalov had permission to provisional asylum in the territory of the Russian Federation. I was an activist of “Group 24”. It is stolen in September, 2020 in the city of Nizhny Novgorod and sent in Dushanbe. According to some information sentenced to 12 years.

Izzat Amon is the Russian-Tajik human rights activist, I disappeared in Moscow on March 25, 2021, was in the pre-trial detention center of the Ministry of Internal Affairs of Tajikistan. Sentenced to 25 years of imprisonment.

Rakhmatdzhoni Makhmatdzhon, the representative “Groups 24” in Russian Federation, on May 18 this year left the house in Moscow and disappeared. It was stolen and transferred to the authorities of Tajikistan. Sentenced in Dushanbe to 20 years of imprisonment.

And it only “an iceberg top”, the high-profile cases which, were widely publicized. And how many still obscure oppositionists who were missing, such as, Holov Fakhriddin and Kamarov Nizomiddin who in September, 2020 were detained on the Russian-Estonian border and are deported to Tajikistan. We know of them as they are members of our movement “Group 24”. There is no information on their disappearance in the press.

The international community and human rights organizations perfectly knows of political prisoners in Tajikistan. But Rakhmonov denies all charges in the address, persistently calling oppositionists terrorists.

The citizens of Tajikistan discordant with policy of the tyrant Rakhmonov are forced to leave the Homeland, but even the abroad they cannot always be in safety.