Today, activists of the political movement “Group 24” held a picket near the United Nation’s office in Bonn, Germany. The aim of the picket is to release the activist of “Group 24” Mustafo Hayotov, who has been in the deportation camp of Poland for a year. During the picket, activists of the political movement gave an official letter to the UN office in Bonn. Mustafo Hayotov is already tenth day continues hunger strike in detention and is under the constant supervision of doctors and refuses to eat. He can’t walk anymore because his legs are giving out. It should be noted that the activists of the “Group 24” yesterday and the day before yesterday held a similar pickets near the UN office in the Republic of Poland and the representative office of the Republic of Poland in Cologne, Germany. 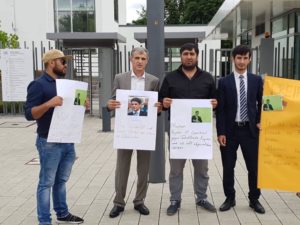