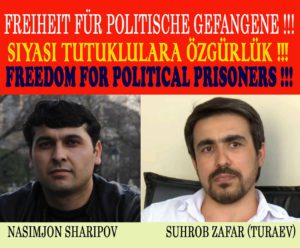 Yesterday (29.05.2018), after 70 days of investigation and detention, the Turkish authorities released a representative of the Group 24 in Turkey, Nasimjon Sharipov. It should be noted, that Nasimjon Sharipov and the head of the “Group 24” Suhrob Zafar were arrested by the Turkish law enforcement agencies on March 19, this year at the request of the government of Tajikistan. Moreover, the Tajikistani authorities have officially asked Turkish government for the extradition of Nasimjon Sharipov and Suhrob Zafar. But the Turkish constitutional Court at that time suspended their extradition for three months. The political movement Group 24 expresses its special gratitude to the government of Turkey for the restoration of justice and expresses its gratitude to all international organizations and all those, who contributed to Nasimjon Sharipov’s release. We hope that Suhrob Zafar, the head of the “Group 24″ also will be released soon”.